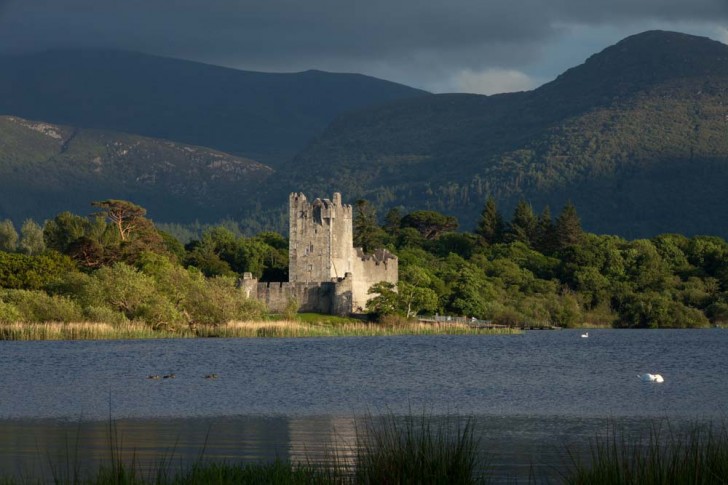 St Mary’s Cathedral was designed in 1842; it was designed by an English architecture. It is considered to be one of the most important gothic Churches of the 19th Century. It was used as a famine hospital and shelter during the 1840’s. It was opened to the public in 1855. The cathedral consists of beautiful stained glass windows on both sides of the main aisle. It opened daily to the public.

Located only minutes from the Lake Hotel, Ross Castle is one of the most attractive 14th Century Castle in Ireland. Inside, it is restored in a 17th Century style. It was firstly built by O Donoghue Mór in the 14th Century and was taken over by the McCarthy Mór in the 1950’s.. Today, it is a very popular attraction in Killarney as it is located overlooking the Lake where not only tourists visit on a daily basis but also locals as its host to beautiful scenic views and walking trails. There are daily guided tours available from the Ross and Boat Trips around the Lake.

Ogham was the earliest form of Irish writing. It consists of straight and slanted lines written around the edge of a rock .This was normally done on either headstones or in relation to a memorial of a person and their ancestors. There are Ogham Stones located 8km west of Killarney on the N72 Road. Over the River Laune onto Beaufort Village. Straight through Beaufort Village and then half a mile onwards, it will be on your left.

The Gap of Dunloe from Irish Dún Lóich meaning Lóich’s stronghold. The Gap is narrow scenic mountain pass between the Purple Mountains and the MacGuillcuddy Reeks Mountains. The road through the Gap of Dunloe is very narrow so the Horse and Cart is very popular among tourists as it is a 7k walk. Guided bus tours are available throughout the year with such companies as Tadge O Connors Tours offering guests a guided bus tour and a boat ride around the Gap.

Muckross Abbey is just minutes walk from Muckross House and Gardens. The abbey is the remains of an old gothic monastery and is originally known as the Monastery of “Eastern Way”. There are three of Irelands greatest ever poets buried within the abbey from Kerry and the fourth is buried in the graveyard. In the Chancel is the tomb of the last Earl of Clancarr, McCarthy Mór whom was King of Munster. The high tomb of O Donoghue’s is located beside McCarthy Mór and the grave closest to the wall behind is O Sullivan Mór. The monastery was last reconstructed in the 17th Century. Situated in the middle of the Abbey is the Yew tree which is said to be over 2,500 years old and was inspired by the Muckross abbey yew and based around the history of Killarney.

Muckross house is a large Victorian House located in the middle of Muckross Park. It is located south from Killarney on the N71and located just after The Lake Hotel on the right. Muckross House was built in the 1843 by Henry Arthur Herbert and was once visited the Queen Victoria in 1861. It is considered one of Ireland most popular tourist attractions in Killarney. It allows people to experience for themselves the way people would of lived in the 18th Century & 19th Century. Muckross House is open to public and also gives guided tours. Inside Muckross Park there is also Mucros Craft Centre where tourists have a variety of Irish craftsmanship and Irish merchandise to choose from.

Killarney National Park was the fist national park in Ireland. It was founded in 1932 and expands over 25,000 acres. It is one of the most beautiful parks in Ireland and consists of Irelands only heard of Red Deer. Within the park you will find the Lakes of Killarney, Torc, and Managerton Mountain. The national Park is worldwide known for its incredible scenery and is very popular not just with tourists but also locals. Killarney National Park Visitor centre is located beside Muckross House and admission is free.

Muckross Traditional Farms is a wonderful experience for tourists to experience how Irish people lived in the 1930s and 1940s. Tourists can visit three Irish farms and experience the different chores Irish people had to do on a daily basis. The farms are of different in size starting from the smallest to the largest. Each farm has separate machines and animals in it and is furnished in traditional Irish style in the 1930 and 1940s. At the farms there is also a blacksmith forge, a labourers cottage, and a carpenters workshop.

Muckross Gardens is one of the most beautiful gardens worldwide. It is over fifty acres of garden and consists of natural limestone rockery, large lawn areas, water garden, beautiful bright flowers, & trees. It has beautiful collections of Azaleas, & rhododendron in the park. The park is open to public all year around. The wooded garden is located just 15m from the garden and consists of canopy of yew, oak and pine. There is a 17 acre arboretum just south west of the garden where people can witness certain trees from around the world.

Torc Waterfall is located just minutes from Muckross house and can also be accessed through Muckross Park. The waterfall is easily accessible and has a car park to the left, just before the waterfall. There are several scenic walks from Torc waterfall and Torc Mountain is also located near to the waterfall which is open to the public to climb.

Ladies View is located between Killarney and the Kenmare road on the Ring of Kerry. It is one of the most scenic points in Killarney. It is overlooking the upper lake & islands, MacGuillcuddy reeks and also Carrantuohill the highest mountain in Ireland.   At Ladies View, you will find A Café, Gift Shop and a bar. Ladies View is named after the time the Queen Victoria visited Killarney and she quoted it as “the finest view in the land”

Innisfallen is an island in lough leane which is a lake in Killarney. Here  people can witness the ruins of Innisfallen Abbey. This old 17th century monastery which was founded in 640 by St Finian. Lough leane in English means “Lake of Learning and apparently High King Brian Boru was educated here. It was home to 100s of monks until Elizabeth 1 dispossessed the Abbey. There are boats leaving from Ross Castle daily but only during the summer.

O’Sullivan’s Cascade is located 5kms from Killarney town. It is an unmarked road as you drive towards the Gap of Dunloe. There will be a signpost for Lough Leane to the left, take this left and within 1.5km the surfaced road goes left after across a small stream. Go straight on and through the forest over the stile and the stream. Keep straight and follow road through the oak woods. After 5km you will come to a stream and then a sign for  “ O Sullivan’s Cascade” which will lead you to a beautiful waterfall.

Killarney House and Gardens has opened the grounds to the public in 2016 and in 2017 the house will be opened to visitors.

Killarney is a vibrant town with incredible beautiful countryside and surroundings.  Killarney is world renowned for its history, heritage, activities, and world class hospitality. Killarney is a very popular tourist attraction due to these factors and also due to its welcoming and friendly locals.  It is the base for the renowned Ring of Kerry Tour, the Dingle peninsula and the Gap of Dunloe just to name a few.

Killarney National Park is a beautiful expanse of rugged natural beauty that stretches south and west of the town of Killarney.  It has Ireland’s only native herd of red deer and the most extensive covering of native forest remaining in Ireland.  The park includes the McGillycuddys Reeks, the highest mountain range in Ireland.  At the foot of these mountains are the Lakes of Killarney.

The national park is also home to Muckross Abbey and Muckross House and Gardens.  Muckross Abbey is one of the major Christian sites found in the park.  It was founded as a Franciscan Friary in the 15th century.  In the 17th and 18th century it became a burial place for County Kerry Poets.

Muckross House and Gardens stands close to the shores of Muckross Lake, one of Killarney’s three lakes.  It is a 19th century Victorian mansion that was built in 1843.  It is open to the public for viewing all year round (except Christmas) by guided tour.  Nearby Muckross Farms is enjoyed by younger visitors due to its Animal Petting Area and playground with slides & swings.

Also popular with younger visitors is Kennedys Pet Farm.  This all weather pet farm is an ideal family day out.  There is a picnic area, on site small shop, indoor and outdoor play area and of course the animals.  There are deer, pigs, piglets, horses, calves, sheep, lambs, goats, kids, donkeys, pot bellies pigs, rabbits, duck and ducklings, geese and goslings….and of course cheeky ‘Bambi’.

Killarney plays host to a number of sporting events such as The Killarney Races, The Summerfest Fun Run, the Ring of Kerry Charity Cycle and also the International Rally of the Lakes.  The INEC (Irelands National Event Centre) has attracted big name bands, comedians and other popular acts due to its 3000 capacity theatre with 2 balconies.

In February 2016, Trivago released their latest statistics which revealed Killarney being named named as one of the top 10 global tourist destinations in the world.

The Gap of Dunloe Tour is another attraction for tourists to Killarney.  The Gap of Dunloe is a narrow mountain pass forged between the MacGillycuddy Reeks and Purple Mountain.  The Gap begins at Kate Kearney’s Cottage. The road goes into The Black Valley passing five lakes, Coosaun Lough, Black Lake, Cushnavally Lake, Auger Lake and Black Lough. The Gap is approximately 11 km.  You can hire a jaunting car (horse drawn wagon) to travel through the Pass and take a boat back to Killarney from Lord Brandon’s cottage at the other end.

Choosing where to stay in Killarney, you will be spoilt for choice.  Apart from the Dublin, there are more hotels in Killarney that any other Irish town or city.  Killarney is a tourist orientated town that attracts visitors from all other the world.  Restaurants, bars and gift shops fill the streets.  Tourists can also get jaunting carts around town operated by local Jarveys